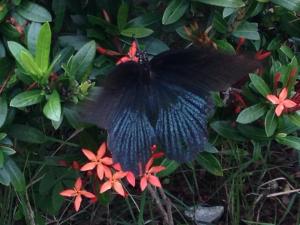 Just one of the many beautiful butterflies

We’ve already established that when I’m travelling, food and local experiences like public transport and getting lost are part of the experience, but one of the main attractions is always the wildlife. As we travelled quite a bit within Thailand, we got to see plenty of wild creatures, starting with an unexpected sighting, on our first day in Bangkok, of a giant head sticking out of one of the canals.

We weren’t expecting to see much wildlife in the capital, but we could see this head quite clearly from the flyover we were stood on – and we were only stood there because we’d managed to get completely lost and were trying to figure out where we’d come from and how to get back there!

Our best guess was a giant rat, and we thought no more of it until the following day when we decided to have a breakfast picnic in Lumphini park and came across several giant swimming lizards. We soon discovered that these beasts are everywhere – and that while the monks feed them, many youngsters around the slum areas find sport in trying to kill them. But no one goes so far as to eat them (unlike the giant bugs that are attracted by lantern light and, therefore, are easy to hunt).

Our first real wildlife experience was a trip out to Khao Yai National Park, staying at Greenleaf Guesthouse (which I highly recommend) for a few days. The tours – which we usually avoid, but here they are necessary if you don’t have a car – were excellent because the guys knew exactly where to bring you to find the various creatures including gibbons, lizards, scorpion spiders, tarantulas, tree snakes, kingfishers, and giant centipedes which we took turns to hold.

We learned lots about the creatures, their habitats, their behaviour, and of course, got to take lots of photos of the creatures as well as the stunning scenery – but nothing can beat the memory of the gibbon families staking their territory with loud calls in the early morning.

In Khao Yai, we got to walk off the usual trails into the National Park, and saw all manner of strange insects, butterflies and bugs – some beautiful, like luminous blue crickets, and some to be avoided.

This is one of the few places to see wild elephants in Thailand; we weren’t that lucky, despite plenty of rigorous searching, but the following day’s group saw a herd of about fifteen. Note: the leech songs get itchy with grass seeds, but do wear them, even though you do get adept at flicking leeches off your leg quite quickly. You can actually see the leeches coming for you if you stop, so you can also try stepping out of the way. .

Another butterfly – with a ribbon-like tail. We also saw a fish that looked similar when we were snorkelling!

Another highlight was getting to see the pink dolphins in Khanom. We’d made the trip there especially for this reason, and I did a weird ‘judder dance’ the day I was on the beach and saw a pink dolphin passing in the ocean. Ridiculously excited, we booked a boat trip with a local guide, and we were really lucky; the weather was incredible (it was rainy season), the sea flat calm, and we saw around twenty pink dolphins.

We were also lucky because our guide refused to feed the dolphins to encourage them to come closer, because this alters their behaviour in the wild. Throwing fish to dolphins encourages them to trust boats – and as fishing is a massive industry here, this is not a good idea. In case you were wondering, all the babies are grey, because the pink colour is due to skin pigmentation, and the dolphins turn pinker as they get older. We didn’t get any photos because they moved too fast – but sometimes I think trying to get photos spoils the experience anyway.

Throughout Thailand we saw an array of gorgeous butterflies, so bright and beautiful they took your breath away. They were always easy to spot in garden and wooded areas, and the way they glided was incredible to see. But if you want to find butterflies in the cities or towns, have a look around any areas with bins – they like sweet foods, and that’s where they’re guaranteed an endless source.

We also saw some gorgeous, brightly plumed pheasants, a variety of squirrels that could traverse the electricity cables of Chiang Mai as easily as they could leap from tree to tree in Chumpon, and some magpie-type birds that glowed blue instead of white. The geckos and praying mantis were a never-ending source of amusement, and then there was the joy of the bubble crabs that created intricate patterns on the sand every morning and afternoon. 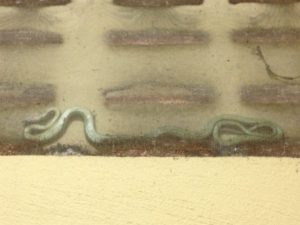 The snake that kept trying to get in!

As for unexpected visitors, we regularly had a frog appear in the bathroom for a night’s kip, and there was a rather determined snake in Suphan Buri that seemed to want to inhabit our room (but thankfully failed each time). There was a similar incident in Koh Yao Noi, come to think of it; every morning, there would be a generous section of snakeskin somewhere in the room – on the bathroom shelf, on the mosquito net – so there was definitely an inquisitive fellow around somewhere.

The island of Koh Yao Noi in the south of Thailand held plenty of unexpected surprises; the hornbills were beautiful, and a pair visited a tree opposite our breakfast table every day. I was amazed that they were so graceful in flight because I expected them to be clumsy like the heron birds that frequent our Irish shores.

There were also lots of mangroves to visit, as well as a fruit bat colony hidden in a giant tree in the middle of a lagoon, and live sand dollars. I’ve only ever seen dead sand dollars before – as beautiful as they are – but to see them live, their purple bodies travelling along the surface of the shoreline, was incredible.

If you are a wildlife lover, then Thailand is a great destination. But make sure you don’t fall foul of the elephant rides or monkey schools (I don’t believe for one minute the claims that they’re chained all day and let free at night), the tiger temples, or even the seemingly harmless dolphin feeding – wildlife should be respected and kept wild, and my next and final post on Thailand will hopefully emphasise that idea further.