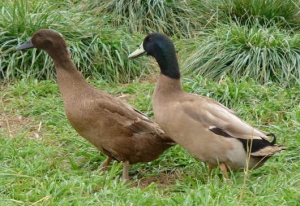 His dad had always said that a home wasn’t a home without a few ducks. Now, Declan wished he’d never opened his mouth about that. Amazing how foolish a few whiskies at a wake could make you.

Victor Sullivan hadn’t been an hour in the ground before his doting son had shared the anecdote with friends and well wishers. Within a week, there was an army of ducks in Declan’s care and yet another red face to contend with.

“Erm, here you go, lad,” murmurs Old Pat as he hands over a Khaki Campbell. A good layer. Over 300 a year. Better than the Saxony that Mrs O’Regan presented earlier; friendlier too, according to the booklet he’d been forced to buy.

“As if the funeral costs weren’t enough,” his wife had grumbled.

“Thanks, Pat,” Declan calls from behind the wriggling neck, before carrying the duck to the back garden and introducing it to the mob.

Wings flapping, the duck runs clumsily over young lettuce shoots and hides in the prized herb bed. Declan hopes it’s feeding on a juicy slug, rather than his basil. Marcy would like that as much as she liked his old man.

As the gate swings open, Declan crouches on his heels, sinking into the grass.

“Not another bloody useless duck,” tuts Marcy, eyes lifted to the heavens. “I swear, Declan, I won’t be back out here until they’re all gone.”