This is the second looking at what my local environment has shown me as a writer. (You can read Part I here).

Rushing fails – This year, I had some flourishing courgette plants ready for the garden. At the beginning of this month, I planted them out, pleased with their progress. Within two weeks, they were all dead. I’d ignored the possibility that the shift in conditions may be wrong – and I paid the price. Likewise, there’s no point trying to suddenly bang out a 2000 word short story a week before a competition closes. I know, I’ve done it. The work was inferior and had no chance of getting selected. I might as well have donated the entry fee as a gift.

If you’re not so good at being rigidly organised, keeping a stock of half-finished stories is a good habit to adopt; you can pull out them for final shaping as competitions approach. But if you’re not happy with your work, don’t submit. It’s fine to decide not to enter a competition or submission because your writing isn’t quite ready. I’ve done that twice this year already. It’s better to get a piece of work right and rehouse it elsewhere at a later date than submit something that’s not good enough.

Flexibility rewards – Sorry to keep banging on about my courgette plants but once again, they’re relevant. I’ve been propagating more seeds in the tunnel and shoots are starting to show. Despite my earlier haste, I’ve given myself enough time to grow more. We won’t have as plentiful a supply as we would have had if I’d not rushed, ignoring the conditions and external factors, but at least I’ve come up with a solution that means we’ll have some produce for the table. 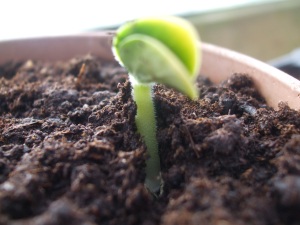 The infamous courgette (Round 2)

When writing, you need to stay flexible. After all, every time you share something you’ve written you’re open to criticism, rejection and opinion. Some of the feedback will be constructive, some useful and some not. But be ready to sift through the advice and take the relevant stuff on board, adapting your work accordingly. You also need to be flexible in terms of how you grow as a writer. If the narrative isn’t working in first person, try swapping to third person. If a character is proving tricky, figure out where the gaps are and amend accordingly. If you’re always writing prose, try poetry instead to hone different skills. Even if it’s not to a publishable standard, you’ll gain from the experience.

Learn from your mistakes – If you’re submitting a novel to publishers, for instance, and several editors suggest that the pace is too slow/your novel is too plot driven/a specific character is unbelievable – then guess what? They’re probably right. Several people noticing the same issue probably means that it needs work.

If you’re writing short stories or poetry and have spent months working on a piece but still had to rush at the end, make a note to give yourself more time in the future. If you’ve a story idea that just isn’t working, store it in your reserve file and work on something else. It may be that the timing’s not right or that the idea isn’t as good as you initially thought. You’ll know the answer when you revisit it at a later date. (And yes, you guessed it: my courgettes won’t be going out until June next year.)

What can your environment teach you?

(Huge thanks to @derekF03 for inspiring these posts. You can read Derek’s blog here.)

3 thoughts on “Back to Basics (Part II)”