Ever wondered how you take a short story and turn it into a film?

Although I don’t write for screen, I write short stories, and the idea of watching the next step in any creative process intrigues me.

Luckily, I had the chance to attend this outstanding, fully interactive workshop with British film director Jack Gold – and I thought it only fair that I should share some of the key elements for all the short story writers, film makers and film watchers out there. 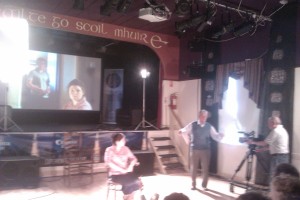 The story: Dusky Ruth by A E Coppard

The process: The audience was given a printout of the story beforehand to familiarise themselves with the tale. Then, after Jack’s short introduction, it was straight to work.

The section that Jack chose to demonstrate the filmmaking process with (when the man returns to the room and the woman doesn’t respond) over the course of the next four hours was purposely dialogue-free. Encouraging audience participation from the start, Jack asked:

“If you don’t have dialogue, how do you get inside the heads of the people watching?”

The audience concluded that expression, lighting and mood were the key elements. But what we couldn’t figure out was what made it work. As a writer, I should have realised that editing was the key. Jack explained:

“Filming a piece like this is a jigsaw. You film the links in the chain – both big links and tiny links – and then join that chain. Editing is fundamental to storytelling, in whatever medium you’re telling the story.”

He went on to discuss and identify the ‘hingepoint’ of the piece – where the action takes off in a different direction – and then demonstrated the critical thinking required of any film maker. The first problem posed:

“Where do we place the chairs so that the character can do all the things required of him in a way that’s beneficial to the audience through the camera?”

This was much more difficult than you may think; every time we thought we had it covered, we’d realise that there was an action or a response that didn’t fit.

Once the positioning of the props was correct, Jack went on to direct the actors on the spot, questioning the audience throughout and spending the required amount of time to get each action and shot exactly right. Similar to writing a story, the number of takes or ‘redrafts’ was astounding – the pace, mood, position, action, expressions all had to be perfect, along with the camera angles and lighting. Even some of the tiny links – such as the actor pausing in a doorway – had to be shot a total of twenty one times before the take was right.

As well as considerations for plot and action, Jack also talked us through camera tricks (such as contrazoom) and film making techniques that would enhance the film’s overall impact, enabling the film to capture the essence of the written original.

“How can we emphasise the strange yet sensual moment when the stranger approaches the seated woman he’s never spoken to, who hasn’t acknowledged him, and undoes her hair clasp?”

The conclusion: physical space and pace, physical speed and subtle gestures which are magnified on camera if you zoom in.

One of the most intriguing things highlighted in the session was the treatment of the female character. She didn’t move at any point during the scene. Her sole role was to gaze into (an imaginary) fire without looking up or changing expression. However, as a parallel to silent characters in fiction writing, her presence was of high importance throughout. Her internal dialogue was indicated by lighting, camera movement and zooms and the reaction of the male character, rather than any actual response of her own. As Jack demonstrated, a fast pace and lots of action isn’t always necessary.

“You can have all the rhythm in the world, but if you’re not telling the story, there’s no impact, there’s nothing to watch.”

After acting out and shooting the jigsaw pieces, Jack then adjourned the session to put together the pieces so he could demonstrate the editing process. During this session, the audience were shown how certain sections were cut, joined, overlapped, altered and finalised. Of course, this was just a taster. To create a polished full length short film in a few hours would be impossible.

In Jack’s own words; “The first assembly part alone could take months. Every piece has to be exact. Film making is like storytelling; it takes so long because it’s a ceaseless search for perfection.”

It may have been just a glimpse of what’s needed to turn a story into a film, but there was certainly lots of information to take in and take away – most of which applied to storytelling in general, not just on film.

Some of Jack Gold’s tips:

Please note: This is just a taster of the four hour session. I’ve transcribed the actual event so if you are working on a project like this and would find more information useful, please let me know. 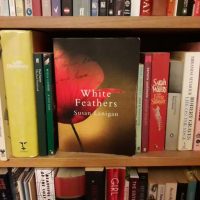