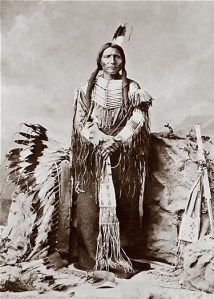 I’ve recently been watching a series of documentaries on the Wild West. I don’t have TV but I’ll watch pretty much any documentary on DVD. This particular series is one that my husband taped on video – I’m showing my age here but, remember those days? Trying to pause the recording before the adverts came on, and then start it up again without missing anything? How you couldn’t switch channels as otherwise the recording would switch too? Ha! Alien concepts in this day and age. Anyway, I digress…

These documentaries are brilliantly done. Well researched and lots of original footage, from photos to letter to diary entries to film – and the reportage is really balanced. Apart from the on-screen wobbles, you wouldn’t think my husband recorded these 14 years ago and we’ve only just had them converted to modern technology!

Why am I telling you all this? Basically, because of a point that was highlighted in Episode 3 that set me thinking. An historian pointed out that the main difference between Crazy Horse and general Custer was that Crazy Horse already thought he had the perfect life; he was in a state of being and wanted to be allowed to continue. On the other hand, Custer was in a perpetual state of trying to improve – he lived in a permanent state of becoming.

I think this Custer reference is a great description for artists and writers. As far as I’m aware, the creative mind constantly demands improvement and change, so there’s always movement. This movement is as unpredictable and unruly as the rolling seas, but it creates the driving force behind old ideas in fresh voices, adds the necessary passion and magic that takes something good and makes it incredible.

But is there another way to be? A less frantic and unsettling approach? My husband is definitely a Crazy Horse – he approaches life in a calm and steady manner, and has more energy and staying power than anyone I’ve ever met. He’s an incredibly creative and talented singer/songwriter, but isn’t driven to the peaks and troughs of emotion that charge in unannounced to my days. Instead, he meanders his way and eventually gets there.

We’ve discussed this and he seems to think it’s the length of the work involved and the fact that when you perform, you get an instant response from the crowd – hopefully a positive one. Although singer/songwriters suffer from nerves and stage fright, the catharsis comes much quicker. Writers, on the other hand, spend long periods of time in solitude and the work requires more input, a different approach. And there’s no guarantee anyone will actually read what you write.

So is this the key to being Custer, or does it just come down to personality? What do you think?

As writers, can we ever mirror Crazy Horse and just be?

3 thoughts on “Are you Custer or Crazy Horse?”