The food adventures continued as we moved around Thailand, with each area taking particular pride in its local dishes and specialities. And at all times, there was a clear fusion between Thai food and Thai life. 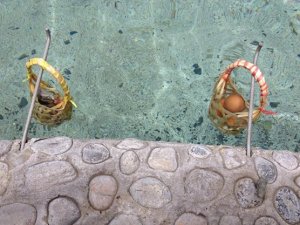 Boiling eggs in baskets at the hot springs

For instance, the owner of the homestay we chose in Suphan Buri took fruit to be blessed at the temple daily, and then put it out for her guests to bring them good luck – a very important element of Thai culture. The spirit houses were always bursting with food and drink for the ancestors, and there were edible holy fish fatted in the pond. We didn’t quite manage to decipher whether they would or would not be eaten.

When we stayed with a family in Chiang Mai, they were so hospitable that they took us to the San Khamphaeng hot springs on their day off, so we could boil eggs in the sulphurous water and make a picnic. We were the only westerners there and it was a real honour to sit with our feet in the springs alongside the locals. There were some rather odd-looking offerings also available and we weren’t even sure whether they were on sale for boiling – but we later found out they were definitely there as food (see beetle photo).

Afterwards, our Chiang Mai hosts took us to a local restaurant famed for its Isaan-style food. We would never have found this on our own and we got to try new spicy fruit salads, sticky sun-dried meats, and delicious fresh fruit smoothies made with ice we could actually drink. (Most people don’t realise but the biggest cause of upset stomachs is from the ice in drinks made from tap water so just in case, avoid, avoid, avoid!)

One of the clearest examples of how lifestyle and belief influenced food was during our stay at the Elephant Nature Park in the Mae Taeng valley, Chiang Mai province. A wonderful conservation centre focused on rescuing and rehabilitating abused elephants – as well as over 400 dogs, a herd of water buffalo and some humpy-looking cattle – the flavoursome food they offered was completely vegetarian, reflecting the animal-centric ethos of the park. (I love tofu but didn’t realise it could be presented in so many ways!)

The park also welcomed us with an intriguing good luck ceremony, led by the local village shaman. The food, flower and candle offerings were placed on a small, decorative float and the ceremony consisted of all our bad luck being drawn out by the shaman’s song. This was deposited on the float, which was then sent away down the river. We were all given white blessed wristbands, just to make sure the luck stayed, with strict instruction on which wrist they were to be worn (left for female, right for male), how long they could be worn (between 3-7 days), as well as how to remove (untie, not cut – and then keep). 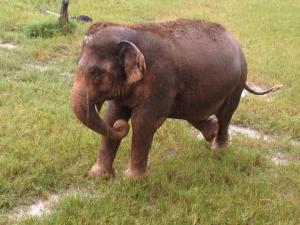 Not edible – but I had to post a pachyderm.

The Elephant Nature Park also bade us a lucky farewell with a traditional Khantoke dinner. I’d hoped to experience one of these while in the North of the country, but had trouble finding one in Chiang Mai that wasn’t solely catering for tourists. These dinners consist of small, low tables, where you sit with others on the floor and share food. The village presents the food, with traditional entertainment while you eat – such as local music, candle dances, and mask dances. The spirit is one of celebration and the aim is – you guessed it – to guarantee good luck from the spirits when you leave.

It didn’t matter where we travelled in Thailand, the quality of the food was impeccable and food was central to everyday life. Everyone liked to show off and share, and it was clear that you lived for food, rather than ate food to live. Food was ritualistic and an important event, not something to shovel down quickly.

Just try wolfing down the special BBQ served in Khanom without doing yourself an injury: the hot, domed griddle in the centre of the BBQ is kept fizzing with a wedge of meat fat, while the coals inside the dome keep the soup bubbling. You dip your fish, meat and seafood in raw egg and BBQ it while adding vegetables and noodles to the moat of soup around the outside. Move too fast and you find yourself cooking as you try to keep things turning, but too slow and the meat fat starts spitting. It’s all part of the experience and after our fifth (yes, we liked it!) attempt, I think we got the hang of it.

There were many more food adventures we could have engaged in, but we had to leave some for next time. We didn’t try any of the deep fried tarantulas or crickets, but we did have the rich boat noodles (flavoured with pigs blood) and the gloopy chicken rice soup for breakfast, which is definitely an acquired taste. 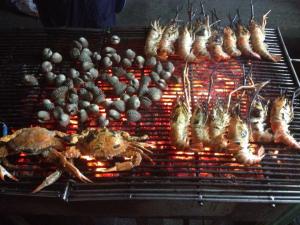 Just one of the many delicious street-food seafood BBQs

But I think the best thing about the food in Thailand was the overall experience and seeing the pride people had in their dishes. I’ve cooked many Thai dishes since returning home, but without the buzz of hungry queues, the hum of traffic, the glorious sun and a person peering over the counter from behind a wok, curious to know whether you’re enjoying it, it just doesn’t taste the same.