One of the elephants with a permanently dislocated hip, rescued from forced breeding programme

Our Elephant Nature Park visit definitely deserved a post of its own, especially as a follow-on from the post about Thai wildlife. Although the elephants in the park are not ‘wild’, they’re as wild as they’re ever going to be due to their prior circumstances.

Because most of these creatures went through the awful ‘breaking’ process during training, and have always been under the violent control of people, releasing them into the wild would be impossible. They have no natural social cues and so wild elephants would either see them as weak or a threat – and so they would end up killed.

Our role in the park was to help unload fruit trucks, clean and prepare elephant food, shovel elephant poo, bathe elephants, shovel more elephant poo, plant trees, weed and manure trees, and to also help walk the many shelter dogs (rescued from floods, abuse and the illegal meat trade) on a daily basis.

There was a good balance between helping out and getting to watch the elephants (as well as cattle and water buffalo herds) from various viewing platforms, and there were also talks and walks amongst the elephants in their grounds. We also got to interact with the local village shamans and school children, taking part in ceremonies and special Khantoke dinners, so we really did get to see a slice of life in that part of the country.

Considering the situation they are faced with, the Elephant Nature Park is doing an incredible job of rehabilitating these physically and mentally abused elephants through positive reinforcement. They are faced with a bit of a conundrum, however, which some people found a little difficult to get their head around. 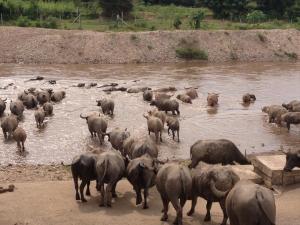 Lek (founder of ENP) and her staff want the elephants to live as normal lives as possible, making their own friendship and family groups and being allowed to roam the grounds on their terms, but they also have to bring in money for the park to keep it open and to be able to rescue more elephants. This means they have to let people get close to the elephants by feeding them, bathing them etc – which keeps the element of human interaction high.

Although some people feel this is going against the park’s original ethos, I disagree. It is clear that the elephants that interact with visitors will never be able to be released into the wild, and the interaction they now receive is wholly positive – no riding, no bull hooks, no violence.

I don’t think they could do the amazing job they’re doing any other way – and I truly believe that if it is possible, Lek, will find a way. Her love for the animals is bottomless, and the way she interacts with them has to be seen to be believed – if there is such a thing as an elephant whisperer, then that’s her. 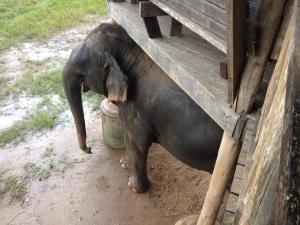 There are a couple of exceptions among the elephants that are worth noting – two fully grown bulls that were orphaned. These animals were not exposed to the ‘breaking’ cruelty as they were rescued and raised by Lek at a young age. They have never witnessed violence and do not see humans as their superiors or friends – in fact, one is known for throwing logs and rocks at any humans that come near. These wild instincts means there is hope that these animals may be released into their natural habitat; I’m certainly interested to see what happens.

This was the most expensive part of our trip, but I felt like every penny was worth it. The experience we had, as well as knowing that every single penny went into the ENP, was exactly what we had hoped for – and like many of the volunteers there, we would like to return one day to see what further improvements have been made.

There is so much more I’d like to write about Thailand, but unfortunately, there just isn’t time. I’m currently completing my edits for my publisher, preparing for my Cambodia trip in January, and finishing up my freelance work before I head out to work with Singing Kites. I’m really excited about helping this charity, as I love their ethos of ‘a hand up, not a hand out’. I’m also looking forward to what the country and its people will show me.

I didn’t have my computer with me in Thailand but as Cambodia is a working holiday, I’ll be bringing it along, so I’ll be blogging about my time over there as often as I can. I hope to support the charity not just by physically being there, but by raising awareness of what they do.

I fly out on New Years Eve, landing on New Year’s Day in Phnom Penh – hopefully you’ll join me by helping to spread the word about the great work that’s going on over there?